Chat with us, powered by LiveChat Side Effects & Dangers of Mixing Lexapro and Alcohol - SC Rehab

The Dangers of Mixing Lexapro and Alcohol

Home » Blogs » The Dangers of Mixing Lexapro and Alcohol 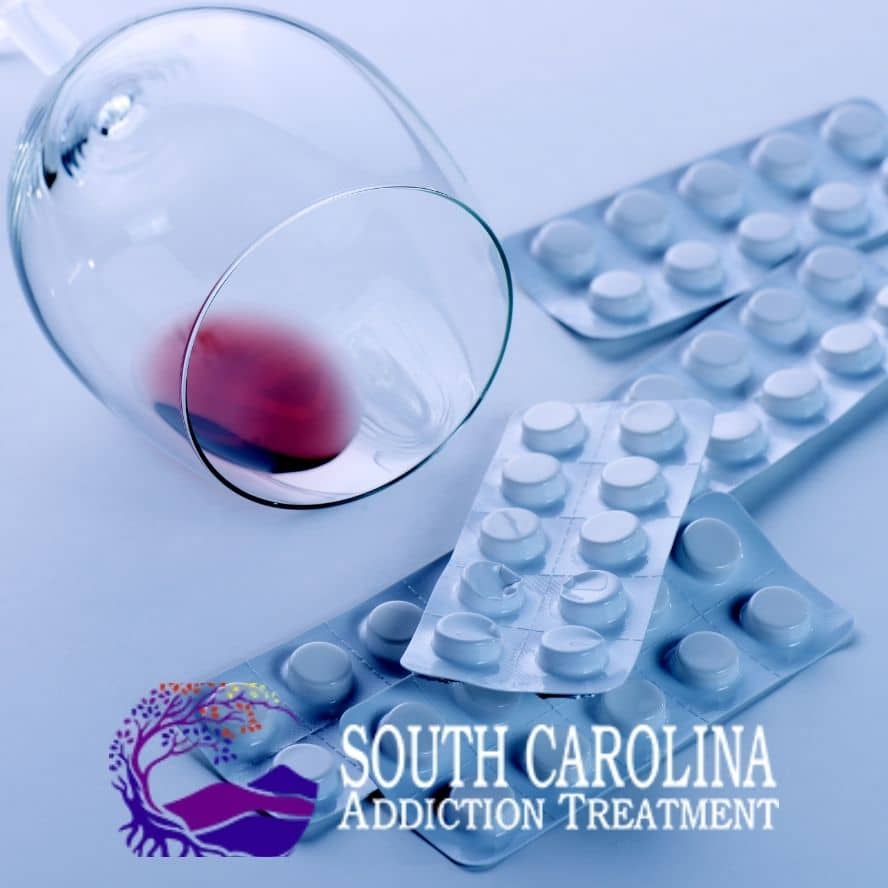 Unfortunately, not everyone who struggles with depression knows how to deal with their symptoms. Some may turn to unhealthy behaviors, such as drug or alcohol use, to cope with their symptoms. While this may seem like a good way to unwind, drinking alcohol to cope with depression is dangerous – especially when you are mixing alcohol with antidepressants like Lexapro.

What is Lexapro (Escitalopram)?

Lexapro is the brand-name drug, escitalopram, a medication used to treat depression and anxiety. It belongs to a class of drugs referred to as selective serotonin reuptake inhibitors (SSRIs). SSRIs aim to restore the natural balance of serotonin, a neurotransmitter that affects mood. When taken as directed by a physician, Lexapro is a very safe medication. 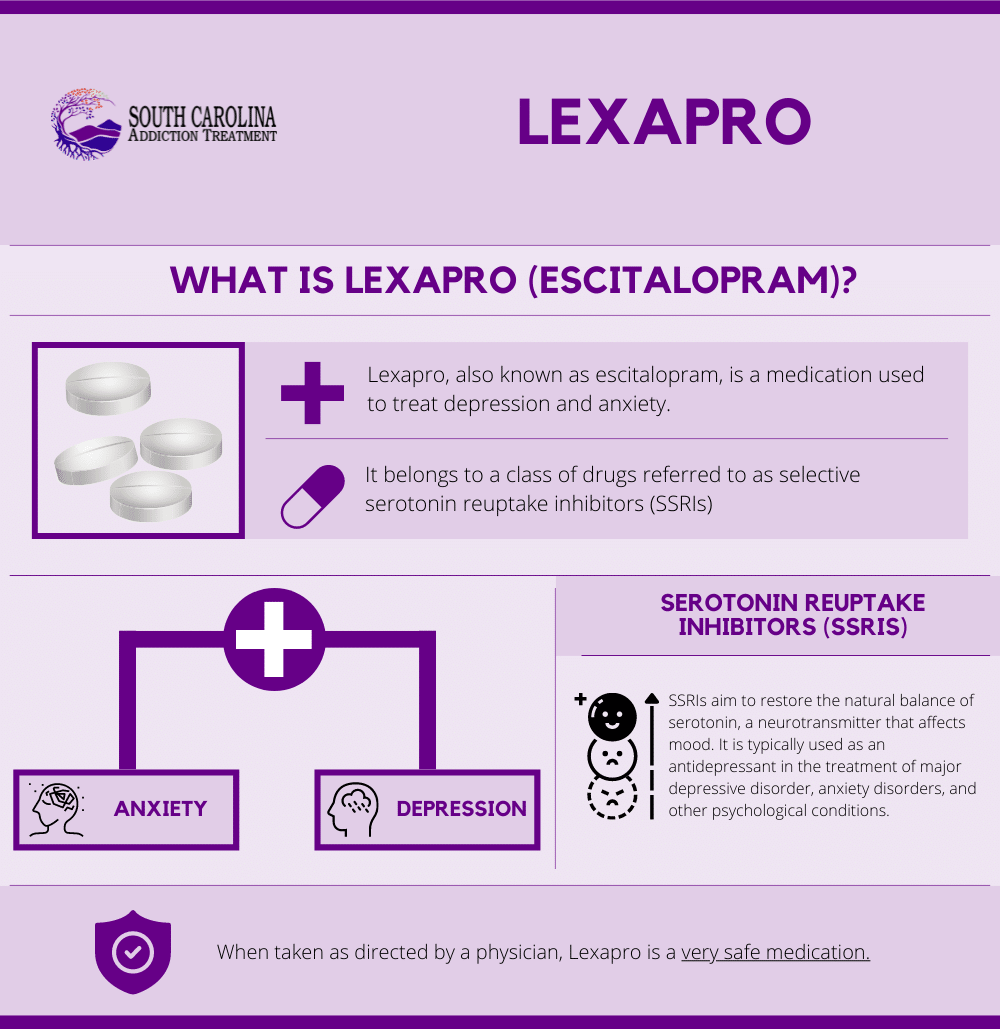 Even though SSRIs are considered the safest type of antidepressant, they may still cause side effects. The most common side effects of Lexapro include:[1] 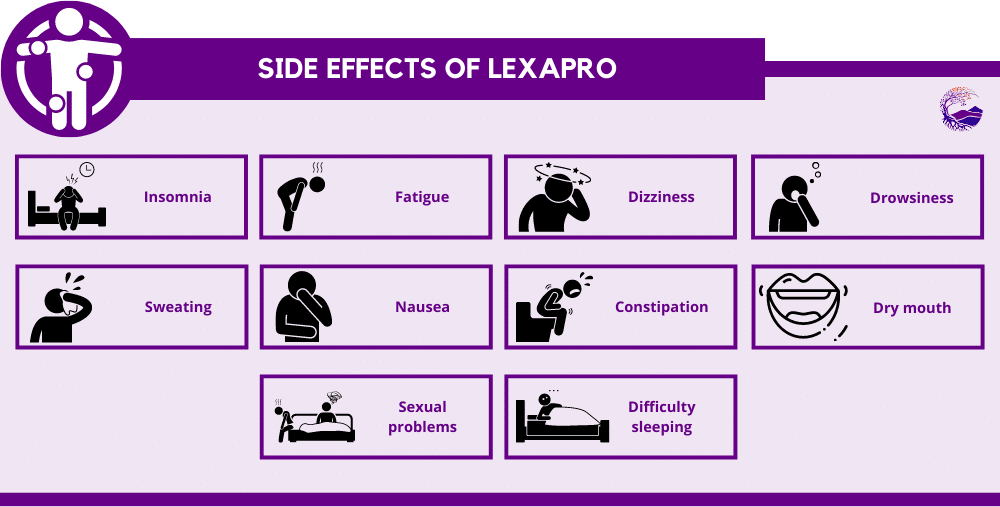 Is it Safe to Drink Alcohol While Taking Lexapro?

Depression is a challenging mental health condition that, while improved with medication, may never be completely cured. Some people may seek out alternative coping mechanisms to deal with their depression, such as drinking. Although Lexapro is not thought to increase the effects of alcohol, mixing Lexapro and alcohol is generally not recommended by physicians.[2]

Some people, such as those who are at low risk for alcohol use disorder, may be able to drink in moderation while taking Lexapro. Individuals should always speak with their doctor before consuming alcohol while taking any medications.

Side Effects of Mixing Lexapro and Alcohol

People who consume alcohol while taking Lexapro may experience worsening side effects of drowsiness, dizziness, and sleepiness. This is because both substances depress the central nervous system and cause similar side effects. Additionally, mixing the two substances can worsen anxiety, depression, and suicidal thoughts.[2]

Dangers of Mixing Lexapro and Alcohol

Mixing any two substances always comes with some level of danger and risk. This is potentially true when it comes to mental health medications.

Even though studies have found that Lexapro does not increase the cognitive or motor effects of alcohol in healthy adults, it’s important to remember that depression is a risk factor for alcoholism.[2] And, drinking while taking antidepressants can reduce the efficacy of the antidepressant, making people even more susceptible to depression.

Here are a few common risks associated with mixing Lexapro and alcohol.

In some people, moderate to heavy drinking while taking antidepressants like Lexapro can lead to a more sensitive response to alcohol.[3] People may become unexplainably violent and inhibited. They may also experience memory loss associated with alcohol blackouts.

Serotonin syndrome, although rare, occurs when there is too much serotonin flooding the brain. Both alcohol and Lexapro increase serotonin levels, so mixing the two substances can possibly lead to this condition. Symptoms of serotonin syndrome include:[4]

Serotonin is considered a medical emergency that is dangerous without immediate help.

The primary concern associated with mixing Lexapro and alcohol is the risk of increased depression and suicide. There is already a strong relationship between alcoholism and depression, and many people drink to try and deal with depressive symptoms. And, since alcohol can reduce the efficacy of Lexapro, mixing the substances can make a person more depressed. Some people may even come suicidal. In fact, nearly 22% of suicides occur in people who are intoxicated with alcohol.[5]

If you find that you experience any of these symptoms while mixing Lexapro and alcohol, you may want to speak to your doctor or try cutting alcohol out of your lifestyle. But, if you try to cut back on drinking and find that you are unable to, you may have a more serious problem — alcoholism.

The good news is alcoholism, like depression, is entirely treatable with a comprehensive and individualized treatment program. Here at South Carolina Addiction Treatment, we’re here to provide you with just that. Our evidence-based treatment program combines pharmaceuticals with holistic therapies and support groups so you can heal your mind, body, and spirit from mental health and addiction.

Don’t wait any longer to get to help you need to turn your life around. Call us today to get started.