Chat with us, powered by LiveChat What Does Cocaine Do To Your Nose? - South Carolina Addiction Rehab

What Does Cocaine Do To Your Nose?

Home » Blogs » What Does Cocaine Do To Your Nose? 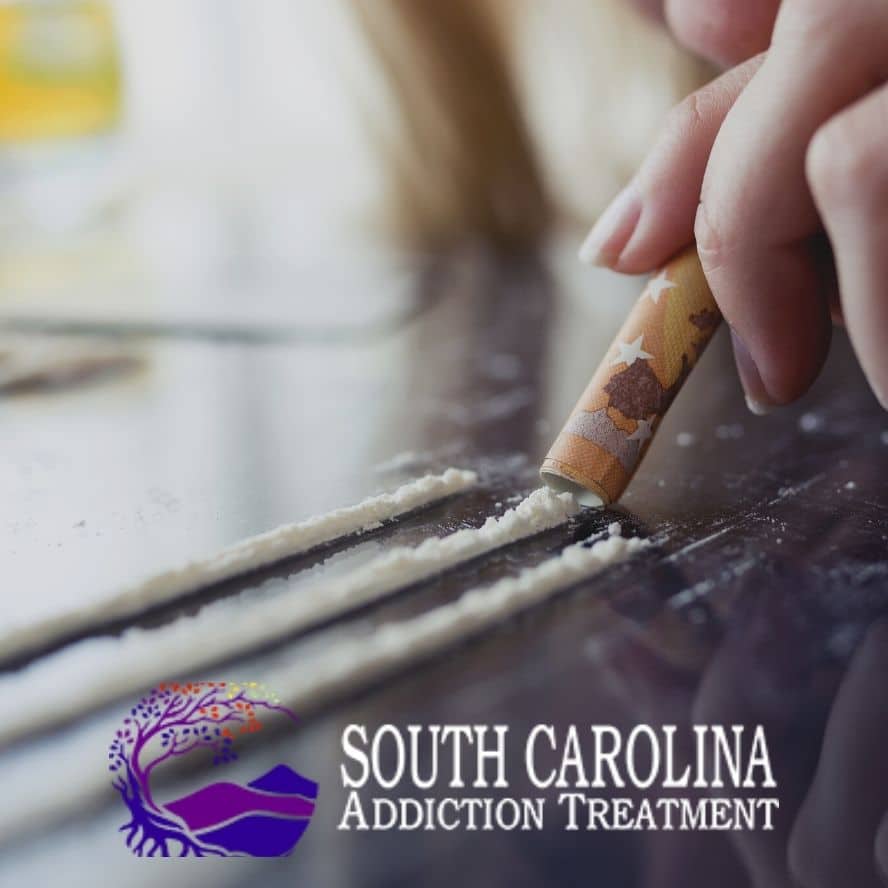 Cocaine is a stimulant drug that is made and sold on the street. Individuals who abuse this substance face a high risk of developing an addiction to cocaine. While this drug can be injected, smoked, and snorted, the majority of users tend to snort cocaine. This is because snorting cocaine produces a longer-lasting high in comparison to other methods of use.

While cocaine causes damaging effects regardless of the method of deliverance, snorting cocaine causes severe damage to the nose. Let’s take a look at what cocaine does to an individual’s nose.

Cocaine is a substance derived from the coca leaves of the Erythroxylon coca, a plant native to South America. This drug is a powerful central nervous system (CNS) stimulant that is known for its highly addictive properties.

Before the damaging effects of cocaine were discovered, this drug was an active ingredient in many medications. Even more surprising, cocaine could be found in Coca-Cola from 1886 to 1929.[1] Thankfully, advances in science and research have led experts to realize the repercussions of cocaine use. Cocaine is now considered an illicit drug and is only found on the street.

While there are various ways to use cocaine, the most common method of use is snorting or “inhaling through the nose”. Individuals prefer this method of use because it creates an immediate high that lasts longer than if the cocaine was smoked or injected. Unfortunately, many individuals do not realize how damaging this substance is to the nose when snorted frequently. 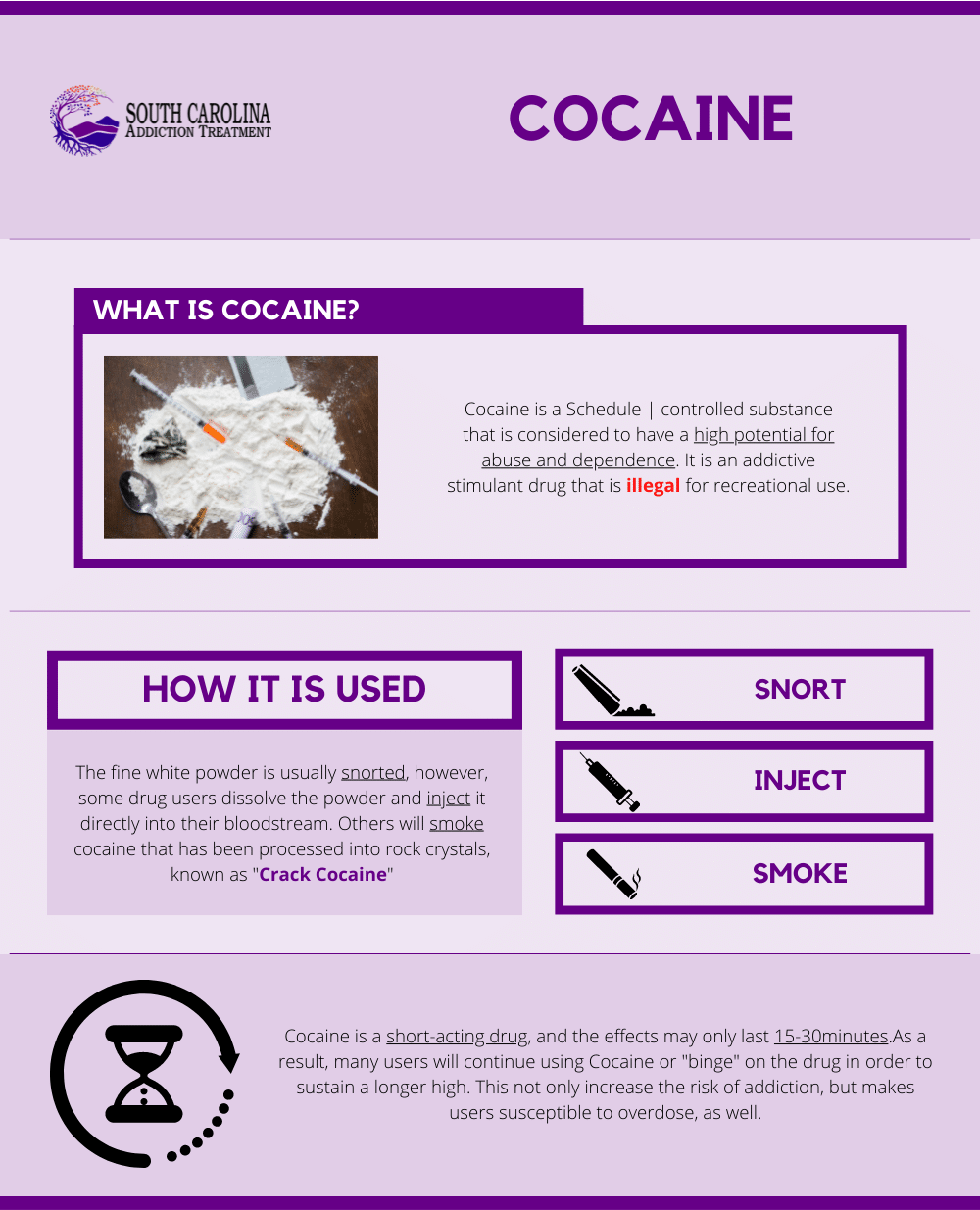 Understanding the Structure of the Nose

Because cocaine users typically become dependent on cocaine, they tend to snort cocaine frequently. This causes serious damage to certain structures of the nose. In order to understand the effects of cocaine on the nose, individuals must be familiar with the different parts of the nose. 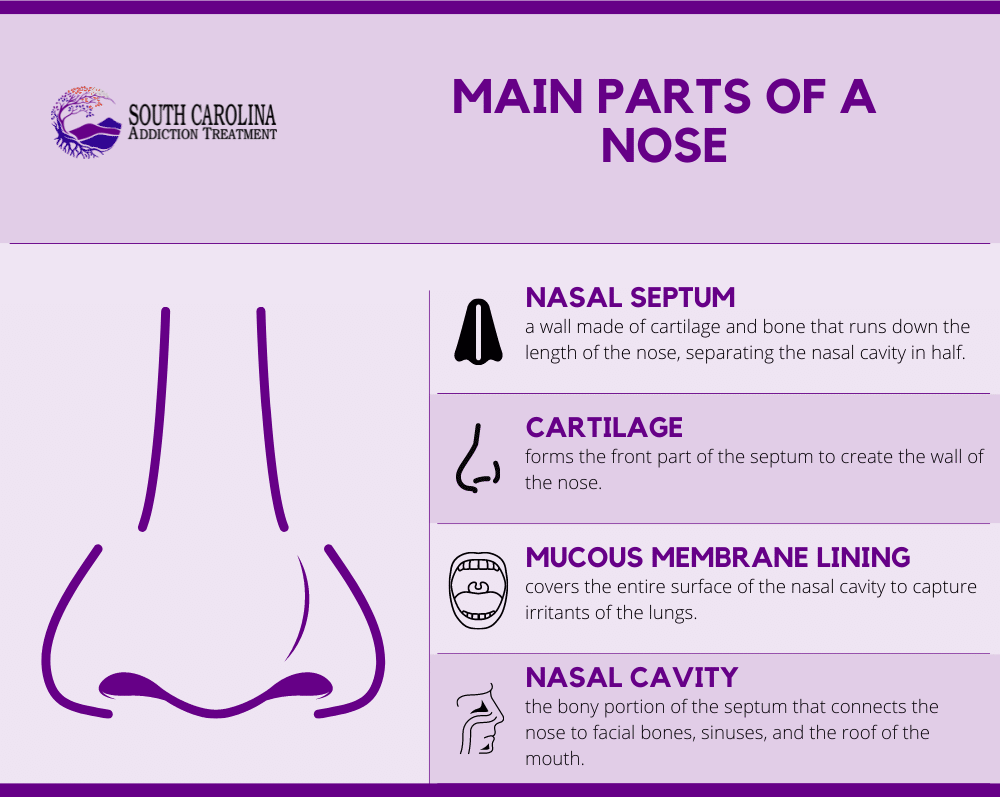 The main parts of the nose include:[2]

Snorting cocaine damages the mucous membrane linings while inhibiting blood flow to the nose. If an individual’s lining is affected, they become more susceptible to inhaling irritating particles, leaving the lungs vulnerable.

The Effects of Cocaine on the Nose

The short-term effects of cocaine on the nose typically include nose bleeds and an overall rawness inside the walls of the nose. However, once an individual becomes addicted to cocaine, they risk experiencing the long-term effects.

When cocaine is snorted, it is first absorbed through the mucous membrane linings, where it enters the bloodstream. Typically, cocaine is mixed with cutting agents like laxatives or caffeine, which will be absorbed into the bloodstream as well.

Unfortunately, individuals will have a difficult time quitting cocaine without professional treatment once they are addicted to the substance. As a result, many individuals develop the long-term effects of cocaine on the nose.

Repeated snorting of cocaine irritates the cartilage and mucous lining, leading the shape of the septum to deteriorate over time. One nostril may even appear larger than the other. This is referred to as a deviated septum, one of the long-term effects of snorting cocaine.

The symptoms of a deviated septum include:

With long-term cocaine abuse, the cells of the nose begin to die. This creates a hole or a perforation in the septum. If cocaine abuse continues, the nose’s cells will continue to die, leading the hole in the septum to continue getting larger until cocaine use is ceased. This is known as a perforated septum.

The symptoms of a perforated septum include:

Hard palate damage occurs when the damage to the nasal structures progresses to the point that the sides of the nose begin to become damaged. The hard palate is a medical term for the roof of the mouth, which sits right next to the inside of the nose.

When mucous linings are irritated, the blood flow continues to die down. This causes the cells that make up the palate to die, eating away at the bone. As a result, holes will begin to form at the roof of the mouth.[3]

Signs of hard palate damage include:

Severe cocaine abuse will begin to affect more than the inside of the nose. Saddle nose refers to a condition caused by damage to the septum that is so extensive that the septum is not able to hole up the nostrils. This causes the nose to collapse, making it look flatter and wider. Unfortunately, only plastic surgery can correct this condition as the damage is permanent.

Getting Help for Cocaine Addiction

Cocaine addiction can happen quickly and tends to cause severe damage to an individual’s nose. Individuals who are abusing cocaine on a frequent basis should consult with a professional addiction treatment center to prevent serious damage from occurring.

South Carolina Addiction Treatment Center is here to help. Contact us today for more information on what cocaine does to your nose and how to prevent long-term effects.